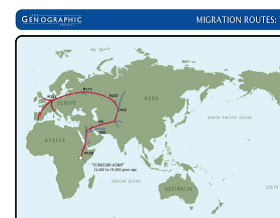 We homo sapiens have a love affair with our DNA. How else can you explain our fascination with our genes? More than a few industries have formed around exploring, propagating and tracking our DNA.

While most humans are focused on ensuring their DNA’s future, those of us who are unable (or elected not) to procreate can only look back. The junior genealogists among us can delve into our past using all sorts of extraordinary new tools. The image here shows the migration route that my father’s DNA took some 60,000 years ago from Africa into Ireland.

It’s just one of the data points included in the birthday present he received last year after we signed him up for the National Geographic Society’s Genographic Project.

The project is a multi-year genetic anthropology study that aims to map historical human migration patterns by collecting and analyzing DNA samples from hundreds of thousands of people from around the world. It’s also helping scientists better understand our human genetic roots.

To explain our infertility I have, on occasion, sardonically observed that my mate and I have simply evolved to perfection. What I didn’t realize was the opposite may actually be true. We may have evolved to imperfection.

According to Stanford researcher Gerald Crabtree, with each new generation humans are growing more stupid.

From Time’s coverage of the two-part study, Our Fragile Intellect, published in Trends in Genetics: “Crabtree suggests that evolution is, in fact, making us dumber — and that human intelligence may have actually peaked before our hunter-gatherer predecessors left Africa.”

Who among us in the infertile population hasn’t witnessed some mind-bogglingly moronic behavior or deed by a parent figure and thought, “he or she got to reproduce, and I didn’t?”

See also  When Life is Interrupted By Failed Fertility

Well now we can feel a bit smug. A press release about Crabtree’s study notes, “recent findings from neuroscience suggest that genes involved in brain function are uniquely susceptible to mutations. Dr. Crabtree argues that the combination of less selective pressure and the large number of easily affected genes is eroding our intellectual and emotional capabilities.”

So here I am doing my part to keep the species from heading into sheer and total ineptness. What else can I say gene pool, but you’re welcome!