Seasons of Change. It’s fast approaching that time of year when I bid farewell to one age and greet another. As of June 12, I’ll formally turn (gasp) 48. I know, right? How did this happen? Ah well, it certainly beats the alternative. I’ve been trying my new age on for size the past couple of weeks. Not aloud, mind you. I’ve decided it’s cheeky and not 50.  That said, I’m going to own 48 and celebrate it — starting in New York. I’ll be speaking at a business conference, visiting friends, and taking in the acclaimed Broadway musical, The Book of Mormon. Looking forward to visiting a great city.

Record breaking in a way that I could do without. It’s June 4 and it’s pouring rain in the San Francisco Bay area. I’m not accustomed to whining about the weather, but it’s not just today that the grey skies have opened up. It’s been doing this rain thing (normally seen only in the winter) for the past few months — more on than off — accompanied by unseasonably cool temps. Temperatures have been running 10 to 20 degrees below normal this year. Since this girl is solar-powered all this abnormal weather makes me grumpy, grumpy, grumpy. This is not why I moved to California. The Mediterranean climate is what makes paying ridiculously high taxes and housing prices easier to stomach. Not much relief in sight. Here’s what the San Francisco Chronicle has to say about this history-making weather:

“The last time it rained this much in June, the Summer of Love was just beginning. And it might even be as wet as it was 127 years ago when residents were driving horse-and-buggies and the big social phenomenon of the moment was the Industrial Revolution.”

See also  What Would Kate Middleton's Life Be Like If She Couldn't Conceive An Heir?

Speaking of days gone by…

Midnight in Paris. If you haven’t seen it, run don’t walk to the movie theater. It’s a film to be savored. It beguiles and amuses and sends your imagination soaring. The sights and sounds of Paris in any age are intoxicating, but the film is also chock full of insights. Among them: embrace the life you have; make your own golden age (an idea that will make more sense after you see the movie). Later, sharing a bottle of Italian Barbera wine over dinner, the film contents provided me and Alex with the fuel to stoke our own dreams–including getting more serious about a trip we’d like to take someday to South Africa and Pilanesberg, a national park set in the crater of a long extinct volcano.

Meanwhile, here are a few photos of our April 2008 visit to Paris, which I revisited this morning after awakening with images of the city and of the magic we experienced there. 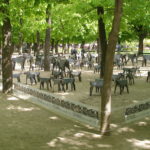 Now, see the movie and let me know what it inspires in you…

8 thoughts on “Seasons of Change … and Another Birthday”