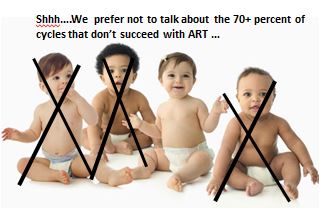 It’s been more than a month since the op-ed prompted by failed infertility treatments, “Selling the Fertility Fantasy,” ran in The New York Times. Infertility stories that don’t end in a baby don’t grab headlines.

But this one did. It reverberated across the infertility blogosphere to the bioethics and media communities, as well as the cancer community. For many who had never stepped foot in a reproductive endocrinology practice the 70% failure rate per ART cycle from the latest CDC report and the 77% failure rate per ART cycle recorded by the European Society of Human Reproduction and Embryology was a surprise. They had only seen headlines about fertility treatment advances and infertility narratives involving a bouncing, healthy baby.

The op-ed struck a nerve most especially with the nearly $9 billion industry (updated: projected to be $27B for IVF by 2020) that stands to profit most from selling services to weary, vulnerable consumers and those recruiting nubile, fertile young women to be egg donor/vendors.

Rather than admit that it is industry practice to cherry-pick their most likely to succeed candidates and market their successful pregnancy rates, along with available donor profiles most likely to attract new consumers to pay the large sums charged, they chose instead to obfuscate and protest about the way the information was portrayed, best exemplified by the American Society for Reproductive Medicine (ASRM) spokesman who acknowledged in an NPR marketplace interview that the numbers shared in the op-ed were correct, but he didn’t like where we placed the emphasis:

‘Some of it is just how you want to present the data,’ Tipton says. ‘A thirty percent success rate and a seventy percent failure rate is the same number.’

As if there’s more truth in arguing the cup is one-quarter full rather than three-quarters empty.

Then there was the program director at the American Fertility Association. Rather than engage in a meaningful dialogue about the limits of medicine and the need for standardized, monitored protocols and better reporting practices, she elected to attack the authors (a common tactic in the ugly politics of our day.) Instead of arguing the credibility of the message we were dismissed as “bitter” and our op-ed nothing more than:

a sad story of two women who did not get the thing they wanted most in life and were unable to find grace in the world they created for themselves.

You have to wonder who exactly the AFA program director is more concerned about: vulnerable individuals asked to fork over $15,000+ for risky procedures with low success rates and cash-poor young women (largely unaware of the risks to their own reproductive fertility) recruited for their eggs — both groups in need of unbiased, comprehensive information — or the industry that stands to profit by downplaying the facts.

In the truly ironic category, there was the response of Terri Davidson who has made a living marketing reproductive medicine. Davidson, who once represented a now-convicted felon — Theresa Erickson who pleaded guilty to being the mastermind behind a baby selling ring — felt perfectly at ease doling out a tongue lashing.

(You can read more about Erickson and the unscrupulous practices of other fertility treatment brokers and clinics in Charlotte Allen’s piece, “Womb for Rent.”)

Those outside the fertility industry looked at the copy objectively and gleaned the larger message we were sending. Jonathan Coppage writes, “Zoll and Tsigdinos are the furthest thing from ideological opponents of in vitro fertilization or other ARTs, but they have learned from their own painful experience that the multi-billion dollar industry that has sprung up around the painfully powerful desire to bear children can blur the divide between doctors practicing medicine and industry professionals making sales. They acknowledge the successes and celebrate them, but explain that:

we rarely hear from the other side, former patients who, in refusing to give up, endured addictive, debilitating and traumatizing cycles. Those contemplating treatments have a right to know about the health risks, ethical concerns, broken marriages and, for many, deep depression often associated with failed treatments.

And this is not the first time there’s been a call for a more rigorous look at the practices of the unregulated fertility industry. Former ASRM ethics committee member George Annas in a PBS Frontline interview a few years ago shared this perspective:

you have a variety of highly professional, in most cases, individuals out there pitching their wares, their success rates, their new technologies, their cutting edge technology to this highly susceptible group of infertile couples who are almost willing to try anything, and almost pay any price to get a baby.

He goes on to make clear:

There hasn’t been what you have in cancer, for example, or other major diseases where you have long periods of people doing experimentation, looking at protocol, developing protocols. Finally, finding something that works and then standardizing it, so other physicians can follow it. Nothing like that in assisted reproduction. Basically, it’s individual. It’s developing their own techniques and then marketing them.

Walk into any fertility clinic and you’ll most assuredly see faces of smiling, cherubic babies often pictured with their euphoric parents, relieved, but without the asterisk.

(* as in: they now possess much smaller bank accounts and we’re not sure what the long-term risks are to mother or infant as a result of treatment since longitudinal studies do not exist. And, in the case of donor eggs, there are no details on the physical or mental health of the young women recruited and whose eggs were harvested for profit.)

Even with a credible, caring reproductive endocrinology team, there is nothing altruistic about the sky-high cost of treatment, which eliminates some high potential candidates from even considering a round of IVF with their own gametes.

There was also a clear divide in the op-ed response between those who were actively in treatment or had succeeded with treatment and those who did not or could not afford it made clear by this blog commenter.

The idea that there can be–with 200 clinics–200 different standards is ludicrous. There should be one standard. If you’re going to deviate from that standard, you should have to explain it the way you have to do in every other area of medicine.

One major organization with the power to institute change, the ASRM, held its annual meeting last week in Boston. The last of the various industry practitioners packed boxes, booths and suitcases and departed Friday afternoon following five days of meetings with only one panel that employed the term ethics: “The Medical, Psychological and Ethical Considerations of Egg Freezing.” A session titled “The Integration of Mental Health Experts in the REI Practice” begs the question: is the integration of mental and physical health only now being considered after 30+ years of REI practice?

The routine experience of this blog’s readers is that mental health considerations at clinics are usually an afterthought. For those no longer writing checks for treatment or receiving checks for providing eggs, there’s nowhere to turn. They’re abandoned.

The only discussion about egg donor health and well-being was a weirdly unhuman-centric session titled: “What’s Good for the Goose Should Also be Good for the Gander: A Medical and Psychological Discussion of Differences in Donor Oocyte and Donor Sperm Screening, Compensation, and Matching.”

In contrast, on Saturday night I attended a very human-centric event involving women who had been lured a few years earlier by advertisements on college campus to sell their eggs. Among the featured speakers was Single Infertile Female blogger Leah Campbell. For Campbell, the endometriosis condition, of which she was unaware, was aggravated by hormones provided during her egg donation cycle. The cycle led to multiple egg extractions and multiple follow-up surgeries to repair the damage. The other former donor, Raquel Cool, suffered from Ovarian Hyper Stimulation Syndrome (OHSS). They were joined by author Miriam Zoll, who at one time considered donor eggs and learned that two of the women offered up to her by fertility clinics were, in fact, infertile.

Together they contributed a dramatic reading, interweaving their stories and providing never-before-heard narratives about the health risks, bioethical concerns and emotional trauma associated with egg donation. It’s part of an ongoing effort aimed at awareness building led by Raquel, co-founder of We Are Egg Donors, an international support network for egg providers. She points out that:

In the U.S., it’s easier to open a human egg brokerage company than it is to start a food truck business.

At the end of the evening I had a chance to compare notes with Miriam, Raquel, and Leah. We all agreed that while assisted reproductive technologies have led to five million births over 35 years it’s long past time to hold accountable an unregulated fertility industry and brokers who often seem driven more by financial interests and technological optimism than genuine medical concern for women (and men) who engage in treatments and surgeries and the babies conceived using ART.

Ours are cautionary tales that can inform a new generation of young women and men who may one day confront infertility. It’s important that they grow up knowing the associated health risks, biological and medical limitations and ethics involved. Ours are very real narratives that don’t lend themselves to glossy marketing campaigns, but in relating the full spectrum of outcomes we will allow future generations to make informed decisions early — not in a place of panic or magical thinking. The primary concerns need to be safety and healthy well-being (both physical and mental for all participating parties) not simply selling the next advanced treatment for profit.

Has your opinion of the fertility industry changed over the years? If so, how?

BBC Health has a story on the chair of the UK’s HFEA (Human Fertilisation and Emryology Authority), Professor Lisa Jardine, calling for better education around the pros and cons of fertility treatment. The UK is setting a leadership example, one that the U.S. industry should follow — not dodge. Among her refreshing recommendations:

Couples considering IVF, she warns, must be made aware of the heartache of unsuccessful treatment. The world of IVF is a market, a market in hope. Those who enter it deserve to be fully informed of its potential to deliver grief and a sense of failure, as well as success. 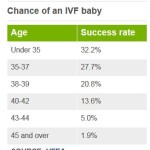 Adding to the challenge is media’s fixation with birth stories. She states: “There is an extraordinarily high level of coverage of any story involving IVF in the media – celebrity births, tales of miracle babies after years of trying…This is a sector that trades in hope, and the papers and women’s magazines are full of encouragement.”

This is all the more reason, I applaud The New York Times  (and the BBC News Magazine) for publishing (and including a link to) our op-ed calling for  objective, independent advice from health care and mental health professionals focused on the person’s well-being instead of the profit.

Kudos, too, to the HFEA for making facts known in the UK (see IVF chart).

15 thoughts on “The Infertility Stories No One Advertises”