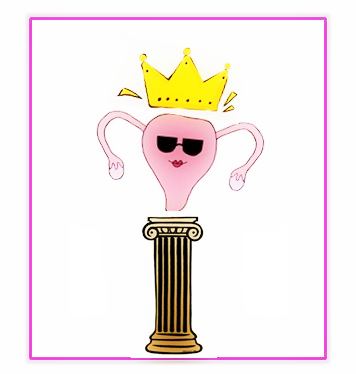 The uterus. It’s just an organ but unlike other organs — a kidney, a bladder or a lung — it carries tremendous identity significance.  Baggage, too — cultural and otherwise.

Upon reproductive age, its power increases. Beyond a vexing way of making itself very evident every month, it also holds the promise of creation.  If, heaven forbid, you possess an uncooperative uterus you might just as well turn your womanhood papers in now. That’s because in today’s reproductive-charged culture the power of the uterus, the ‘womb,’ is all that. Feminine. Goddess-like. Revered. It might just as well be a diva. It practically gets a pedestal. And a crown. Such is the universal uterus adoration and worship. It must be honored and protected at all cost.

Don’t have one or your uterus can’t quite get the job done? Well, you’re asking for some serious condescension and pity. Need some evidence? Let’s take a spin around some recent publications for added perspective.

A CNN piece on miscarriage stigma. Now I respect the writer of this article. She’s written about the culture of parenthood (and infertility) with great compassion and care. That’s why it was a bit jarring to read her latest, and, in particular, a passage about the reticence to discuss it.

She writes: “… many women skirt the topic, even with family and close friends. They don’t want to be seen as the kind of woman who can’t have kids.” (her words, emphasis mine)

Wow. Sure, we in the infertility and childless not by choice community feel a tornado of emotion associated with our uterus. We know all too well the impact of malfunctioning reproductive organs, the losses and the sideways looks. We become steeled for how people may view us.

It’s one thing to make fun of your own body, your family or religion or heritage. It’s quite another to hear someone else do it. So, yes, it was a kick in the head to hear a woman who does have a functioning uterus say “they don’t want to be seen as the kind of woman who can’t have kids.”

That Kind of Woman

What KIND of woman is that? A strong, grounded, compassionate, generous and accomplished woman? No, sadly, that does not seem to be the kind of woman the author has in mind. Whether intentional or not, her words carry a distinct value judgement. The statement reinforces a cultural preference and embrace of women who can successfully carry a pregnancy to term. I had to get beyond my outrage to digest the remainder of Strauss’ piece. I’m glad I did because there are salient points on why talking about pregnancy loss is important.

Perhaps the next CNN piece can explore the stigma experienced by women unable to conceive or sustain a pregnancy — ever. There’s a heap of cultural suspicion and bewilderment intertwined with the grief. I’m sure readers can add to the examples of the prejudice they’ve been forced to navigate.

Let’s now take a look at a uterus perspective from a younger women. Lena Dunham wrote about the removal of her uterus in Vogue earlier this month. She describes her extended, painful battle with endometriosis and her long-held desire to one day feel life growing inside her. An organ removal is never easy, but Dunham highlights the hysterectomy double whammy: “I get very used to the gasp of pity from nurses, doctors, nutritionists, interfaith chaplains—the subtle intake of breath when they look at me.”

As if being in a hospital for a painful surgery was not sufficiently uncomfortable, Dunham also had to stomach gasps and, yes, pity, for never having experienced childbirth.

I’m reminded of a reader who once wrote:

“I have often said this — I hate, absolutely hate, knowing that people feel sorry for me & dh because we don’t have kids. I hate being the object of pity. I want them to know that we’re OK, the world didn’t come to an end, I’m not about to throw myself off a cliff, etc.

But at the same time, just because I’m not standing at the cliff’s edge, I don’t want them thinking that our life is peachy keen either, and that we don’t keenly feel the absence of a child in our life, every single day. I hate the snide little digs about how much free time & money, etc., we must have — because we don’t have kids — almost as much as the pity.”

Let me end with some thoughts from ob-gyn Dr. Anna Reinert. She read Dunham’s piece and, in a powerful commentary for Slate, titled The Only Certainty in Reproductive Health Is Uncertainty, wrote:

“When it comes to reproductive decisions, perhaps the most challenging part is accepting that the control we crave is out of reach. While physicians strive to counsel patients with the best information about their individual risk factors and predilection for disease, the truth is that none of us has a crystal ball. We simply cannot know whether a certain reproductive outcome will happen, or whether a change in behavior will result in a specific reproductive outcome.”

Those of us who have lived the murkiness and the mysteries of an uncooperative uterus know uncertainty all too well.

See also  Atta Girl (And That Means, You!)

For those who have been lulled into thinking that women and medicine have superpowers when it comes to reproduction, I’d like to reiterate Dr. Reinert’s words: “we have influence, but not control over our biology. We can hope for the best, but we can’t expect it.”

6 thoughts on “That Damned Uterus”