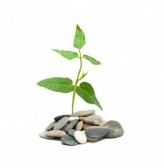 A recent conversation with Lisa Manterfield, a fellow blogger, validated the delicate balancing act required when writing about a topic that is deeply personal — one that has wide-ranging impact and carries the power to reshape our sense of identity and the way in which we grow and move forward in our lives. Lisa described watching a frog swim valiantly and hard across a pond before resting and regrouping, and how it gave it her pause to reflect on her own journey.

Further complicating matters, we don’t uniformly move in the same direction at the same time. Each of us on any given day, when we reflect on it, find ourselves at different stages when coming to terms with infertility or childlessness. The recovery is non-linear.

We’re often so caught up in trying to make sense of a complex experience that we can lose sight of the progress we’ve made. Not long ago I came to realize that I had in every sense survived the trauma of infertility. Over time I had climbed out of the emotional quicksand.  I now view infertility as something that happened to me. My interest today lies in exploring the legacy — what it’s taught me.

In a recent New York Times Magazine article on trauma, a reporter talks to two psychologists at the University of North Carolina, Charlotte, about their research on trauma survivors. They started their research by interviewing survivors of severe injuries. They went on to survey older people who had lost their spouses. “Person after person told them the same thing: they wished deeply that they had not lost a spouse or been paralyzed, but nonetheless, the experience changed them for the better.”

Patterns emerged. Among the trauma survivors:

– they found a renewed appreciation for life;
– they found new possibilities for themselves;
– they felt more personal strength;
– their relationships had improved;
– they felt spiritually more satisfied.

They developed an inventory to track and measure positive changes associated with the phenomenon and coined the term “post-traumatic growth.”

The reporter, in talking to others, went on to write, “The way we cope with trauma is far more complex than once thought, and the way it molds us is similarly complex. We bend, we break, we repair and rebuild, and often we grow, changing for the better in ways we never would have if we had not suffered.”

He concluded that “for most people, change does not occur in a transcendent moment but over years of prosaic searching.”

Hat tip to Carmel, a previous contributor, who shared a link to an interview with Australian journalist and author Gillian Guthrie. Ms. Guthrie’s new book is called, Childless: Reflections on Life’s Longing for Itself. The podcast includes a discussion about the devastation associated with coming to terms with an inability to conceive, and the harsh judgment from society towards women without children. Warning: there is some discussion about challenges that can appear later in life. Ms. Guthrie discusses a recent heartache she experienced — that of missing out on the experience of having young adult children — a topic less explored as most conversations about childlessness focus on the baby and toddler stages. When asked why women remain silent about childlessness, she responded, “It’s a very private thing. There can be a feeling of fault…aspects of grief.” The interview covers quite a bit of territory from the trauma that accompanies losing children in silence and the alienation that women without children can feel in a child-centric society, best summed up by one of Ms. Guthrie’s subjects as “feeling like a fringe dweller.”