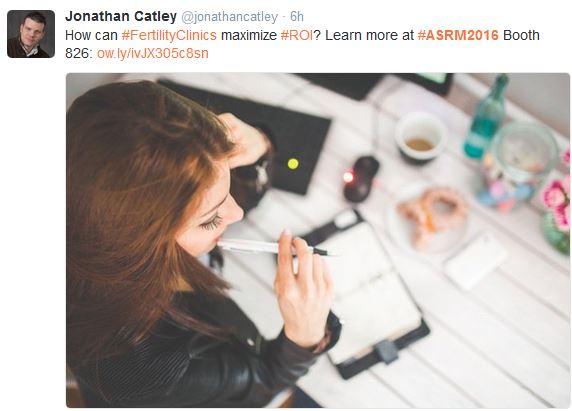 Yes, it’s mid-October so let’s check in on the American Society for Reproductive Medicine (ASRM) confab. This year it’s billed as a Scientific Congress and EXPO. Per usual, there are a few eyebrow raisers.

I followed #ASRM2016 on Twitter over coffee this morning. (A decision made easier as it was raining buckets here in California).

Before long I engaged, respectfully, in a few discussions. Below are some of the highlights and observations. You can find more on Healthcare in America, which published my piece The Cash Cow in ‘Fertility’ Medicine.

Many of us didn’t need research to confirm that distress of infertility equals that of a cancer diagnosis. What many on Twitter and society at large may not know is what Dr. Julie Bindeman tweeted: cancer survivors have better emotional outcomes.

That’s right. For those who may be surprised, let’s start with a few facts.

Fact #1: Fertility is now a huge market. That’s right: a market. The global In-Vitro Fertilization (IVF) market size was valued at $9.6 billion in 2014. A more recent report by Grand View Research, Inc. projects the global (IVF) market will reach $27 billion by 2022. At an average of $15,000+ per cycle, clinics profit handsomely. Not surprisingly, several cycles are common and recommended. The lack of regulatory oversight in the U.S. has caught the attention of investment banks who see ‘market’ opportunities:

Fact #2: IVF cycles more often end not with a baby but with heartbreaking failure. Low success rates and health risks associated with treatment are absent from clinic marketing materials, but the best available data from the Centers for Disease Control shows a failure rate of 72% across all ages. Also hidden from marketing materials is the significant emotional toll caused by IVF failure.

Fact #3: It’s been nearly 40 years since IVF became available. There has been explosive growth in the size and scope of clinics and profit taking but no commensurate improvement in outcomes. Developed initially for a medically indicated fallopian tubal disease, IVF is now routinely marketed and dispensed in cases of mild male subfertility, endometriosis or unexplained infertility. Yet there is no evidence-based science to support these applications.

Fact #4: A study published in the British Medical Journal in 2014 went further stating the risks of IVF could outweigh the benefits. There are calls this year in Australia and the UK for greater scrutiny of reproductive medicine practitioners. That is not the case in the United States.

Instead, the unfettered fertility industry convenes in Salt Lake City this week focused on ‘Scaling New Heights in Reproductive Medicine.’

There’s some troubling irony, foreshadowing even, in this event theme given that the American Society for Reproductive Medicines’ ‘supporters’ include a who’s who in Big Pharma — a group of companies not well known for putting patients ahead of profits.

And while most people hope that a fertility clinic’s first priority is patient well-being and ‘do no harm’ –as evidenced by dispensing compassionate, evidence-based healthcare — we can’t ignore the fact that clinics invoice regardless of how well they perform. Clinics earn based on volume so the goal is to sell as many treatments as they can — regardless of outcome.

See also  All Women Are Infertile Most of Their Lives

Instead of promoting the best Manhattans in Utah, the ASRM might do better to promote and organize some meaningful sessions that seek to improve the overall patient experience.

The only paper at the ASRM event to discuss the infertility patient experience in the U.S. reveals only 29.4% of 499 surveyed agreed their nurse mentioned resources for emotional support. That’s truly disturbing given the level of distress raised at the opening of this piece.

Performance Tip: Next Year Focus on the Patient Not Profits

Since the industry seems incapable of understanding how to police itself or how to prioritize healthy patient outcomes on every dimension, let’s suggest a few ideas for next year. We can start with this one:

Has Patient Health Taken Back Seat to Fertility Industry Commercialism? or How Has Fascination with Science and Profit Become a Priority Over the Human Toll Caused by IVF Failure?

You can learn more about the patient experience in this podcast: Is it Time to Hold Fertility Industry to ‘Do No Harm’ Accountability?

Finally, the ASRM social media team might have had one too many Manhattans. They ‘liked’ my Tweet calling for more oversight before ‘un-liking’ it and then blocking me from receiving its Tweets. So, I guess the truth hurts.