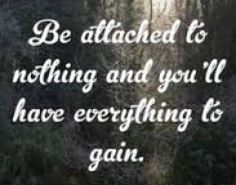 How is it that the mind is so much more agile and able to turn over ideas and philosophies with such ease … in the pre-dawn?

With rain falling softly against the window at 5am, and my iPad lighting up the room, I swiped my screen to find a Sunday Review piece called Abundance Without Attachment. With an engaging narrative, writer Arthur C. Brook challenged readers to consider the ‘Christmas Conundrum.’ That is the competing notions of generosity and goodwill this holiday season juxtaposed with the crass commercialism and related material expectations that surround us this time of year.

Brook recalled an encounter with a Hindu Swami who grew up as a young man of affluence in Houston, TX. After an MBA and early success the young man — unsatisfied — renounced his former life, entered a Hindu seminary, found new strength and now practices a simpler life in New Delhi. The Swami explained the problem in life isn’t money, but attachment to money. The formula for a good life, he explained to Brook, is simple: abundance without attachment.

Augmenting this concept further Brook made reference to the Dalai Lama’s writing:  “The real issue, he writes, is our delusion that ‘satisfaction can arise from gratifying the senses alone.’ ”

I could feel my synapses start to fire as the rain kept a steady beat. There’s something else here.

In Tibetan, the word “attachment” is translated as “do chag,” which literally means “sticky desire.” It signifies a desperate grasping at something, motivated by fear of separation from the object. One can find such attachment in many dysfunctional corners of life, from jealous relationships to paranoia about reputation and professional standing.

This philosophy came alive to me with an application beyond Christmas materialism and greed. It struck me that this also applies to our attachment to ideas.

I had a visceral flashback to my unhealthy attachment — years ago — to a life that was not mine. That life involved getting pregnant with ease, raising children with my mate and following a well-defined path. For a large portion of my adulthood the concept of that life held a very strong hold over me — a deep desire. As I desperately grasped at it and feared separation from it, negative emotions emerged when I couldn’t achieve it. I was left with an emptiness and loss of strength followed by a wash of sadness and simmering anger.

And that takes me back to Brook’s central claim: “The frustration and emptiness so many people feel at this time of year is not an objection to the abundance per se, nor should it be. It is a healthy hunger for nonattachment.”

It was only when I let go of my attachment to a life that would never be and fully detached from the related expectations that a transformation, an awakening occurred. Like the heroine Elsa in the animated movie Frozen I realized …

It’s time to see what I can do
To test the limits and break through
No right, no wrong, no rules for me I’m free

The act of facing my deepest fear and separating once and for all from one particular life path opened up another.  I not only could feed my hunger. Suddenly I had everything to gain.

9 thoughts on “New Philosophy: Everything To Gain”