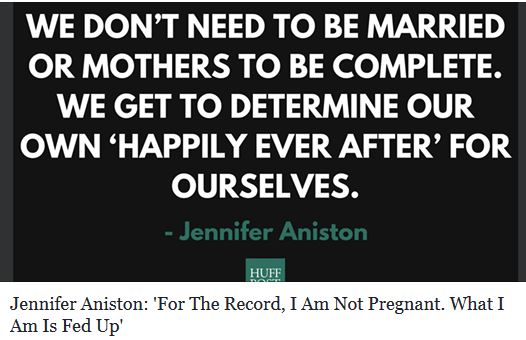 In 913 words she accomplished what many women (yours truly among them) have spent years trying to do: bring attention to a pervasive tendency by society to look down on women who are not mothers. She was helped along in her cause by a political misstep across the pond — more on that in a minute.

First, Jennifer Aniston called out everyone who contributes to the devaluing and marginalizing of women who do not fit a one-dimensional “ideal.” Her HuffPo piece led to many ‘attagirls’ for highlighting the unhealthy body shaming of women who are not supermodel perfect.

Like others, I applaud her tough talk on the harms of focusing on physical appearance. But, I also want to amplify the second part of her message — the one about society’s twisted obsession with “baby bumps” and its unhealthy idolatry of “moms.”

Take it away, Jennifer.

“This past month in particular has illuminated for me how much we define a woman’s value based on her marital and maternal status. The sheer amount of resources being spent right now by press trying to simply uncover whether or not I am pregnant (for the bajillionth time… but who’s counting) points to the perpetuation of this notion that women are somehow incomplete, unsuccessful, or unhappy if they’re not married with children.”

Seems Jennifer Aniston wasn’t the only one calling attention to the devaluing of women who are not mothers this past week.

In England, there was this spectacularly stupid, disparaging statement by politician Andrea Leadsom made to The Times:

“… genuinely I feel that being a mum means you have a very real stake in the future of our country, a tangible stake. She [Theresa Law] possibly has nieces, nephews, lots of people, but I have children who are going to have children who will directly be a part of what happens next.”

Yeah. For reals. Did you groan the way I did?

Now, politicians and their spouses have long used parenthood as a superpower cloak to establish superiority — with nary a ‘huh?’

I know. I’ve written about it extensively. (Flashback to when I spoofed politicians by playing the ‘infertile card’ to establish my street cred and how my infertile state made me a better qualified candidate. Earlier still, in 2008, The American Prospect interviewed me about motherhood in politics in a piece called Are Motherhood Politics a Good Idea?)

Maybe times they are a changin’…

Leadsom’s attempt to argue her motherhood status made her a better choice to govern backfired big time. Quartz and many other publications and blogs depicted this high-profile ‘mommy card’ use as small-minded and prejudicial. Jessica Hepburn wrote  a post about how Leadsom’s comments were a slur to those who are not parents. Jessica summed it up well with this statement:

“Really Andrea? I’d like to see you say that to Elizabeth 1st!”

Boom! Right there with you, Jessica. In fact, blogger Pamela circa 2009 would be positively doing back flips if she’d had a crystal ball capable of seeing into July 2016.

So, let’s get back to a more central idea: society’s love of assigning rank.  We have to recognize that denigrating people based upon marital or maternal status is just plain wrong. As Jennifer Aniston said so beautifully:

“What can change is our awareness and reaction to the toxic messages buried within these seemingly harmless stories served up as truth and shaping our ideas of who we are.”

By the way, Ms. Leadsom, if you’re reading this: those of us who are not mums also care about making the world a better place not just today, but for generations to come.