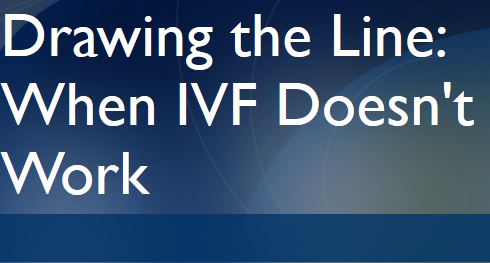 Warning to those in a raw or vulnerable state: take caution listening to the interviews and discussions linked below.

As I come up on my seven-year anniversary of The New York Times piece, Facing Life Without Children When it Isn’t by Choice (June 10, 2008), I can’t help but be reflective.

If you went back and asked 2008 Pamela what she hoped the New York Times health feature story would have led to seven years on, I have a hunch she’d be a bit disappointed with where society is in 2015. Why? Because we are not further along in acknowledging and publicizing the very real limits of Mother Nature and science — not to mention society’s continued infatuation with baby bumps and the too often cultural misfires when it comes to understanding infertility’s long reach.

Progress, though small since 2008, is still progress. Look no further than across the Atlantic Ocean. Yes, leave it to the Brits to tell it like it is.

I applaud the BBC for taking a big step forward these past few days. The media outlet broke new ground in its willingness to look at the under-reported but very palpable dark side of IVF losses.

In Drawing the Line: When IVF Doesn’t Work Charlotte Smith and the BBC reporting team shine a light on the painful reality of the infertility experience and the low odds of fertility treatment success. Here’s what the BBC website called out:

Around 50,000 women go for IVF treatment in a year. For them and their partners it offers the hope of having a baby where natural means have failed. But, on average, only 25% of cycles result in a live birth. So what happens to the couples and individuals in the other 75% of cases that haven’t worked?

With many fertility treatments now on offer and statistics on clinics’ success rates available, couples often feel they should try everything possible to increase their chances of having a baby. Yet when IVF keeps failing, the cost and sense of grief with each cycle can be overwhelming. But, how do you choose to stop when, in theory, the next cycle could result in that long-dreamed of baby?

The world of IVF has been called ‘a market in hope’ by Lisa Jardine, ex-chair of the Human Fertilisation and Embryology Authority, who says extensive media coverage of the successes makes us believe it’s possible for everyone – but in reality people should be informed of its potential to deliver grief and a sense of failure as well as success.

The ‘Drawing the Line’ report led to Jenni Murray picking up the reins with a follow-on piece, The Roller Coaster of IVF and How You Make the Decision to Stop When It Isn’t Working.  If you set the clock to 8.30 minutes Jenni launches into an interview with fellow blogger Lesley Pyne and her husband Roger. They candidly share their decision process and how they moved forward.  Also in this segment is commentary from Kate Brian, a writer, journalist and regional organizer for Infertility Network UK. Kate acknowledges the dearth of societal support for couples coming away from IVF treatment without the child they once hoped to create.

See also  What Would Kate Middleton's Life Be Like If She Couldn't Conceive An Heir?

In a trifecta of sorts Jane Garvey and her team at BBC Woman’s Hour extended the dialogue, opening the lines for callers to share their IVF stories. To help the more bashful, they read Tweets and emails.

Those who have been down the fertility treatment road because they felt they had to ‘give it a go’ were unanimous in their depiction of IVF. They used adjectives and descriptors including:  grueling, painful, isolating, a roll of the dice and ‘left with a sense of powerlessness.’ (Additional IVF trauma studies here).

Hardly a ringing endorsement of what it’s like to experience reproductive medicine.

And now for what didn’t quite work

While I laud the BBC for its risk-taking on this topic, there were a few areas where the programs fell short. The Professor of Reproductive Medicine on Woman’s Hour, the guest in the last segment, often seemed intent on defending IVF at all costs.  Her description of humans as a ‘subfertile’ species seemed a bit, well, odd. Okay, we get that not everyone can conceive on demand, but for many diagnosed with ‘unexplained infertility’ — regardless of age or amount of cycles — IVF will fail. In the case of the majority of this blog’s readers that would be 100% of the time.

Why not expand the Woman’s Hour radio show line up with a fertility industry reformer who can discuss the importance of ‘do no harm’ in reproductive medicine or a sociologist or patient advocate who can help society — particularly vulnerable consumer/patients — understand that failed cycles leave deep scars. Rather than offer up how to make IVF a less awful rollercoaster the professor seemed more interested in making sure IVF didn’t get a bad rap. It would have been refreshing and novel to have a doctor or sociologist or related expert address the larger problem raised by Lisa Jardine:  “In reality people should be informed of [IVF’s] potential to deliver grief and a sense of failure as well as success.”

These programs were an opportunity to highlight the over prescription of IVF. A study published in the British Medical Journal in 2014 concluded that commercial pressure is partly to blame for the rise in fertility treatments, noting: “In vitro fertilisation (IVF) to help couples to have children is being increasingly employed on ‘weak’ grounds.”

How is this for irony? A reporting series that started out on ‘how to draw the line’ and what happens when IVF does not work ended with a call-in show featuring a fair number of callers, Tweets and interview subjects offering up stories about parenthood after XX years of treatments (including donor eggs procured in Spain and a spontaneous conception after they stopped ‘trying’).

Hmm, not sure how these ‘against all odds’ anecdotes are helpful to those seeking information on when to stop. These parental callers also felt compelled to tell listeners ‘not to give up’ on parenthood (the message being … if you just keep at it…)

The programs also could have called for greater scrutiny of bad actors (e.g. for-profit private clinics cashing in on providing services to couples not exactly in the most rational frame of mind). I have a few things to say about that on this video link: Fertility treatment conundrum

Outside of Lesley and Kate’s excellent contributions, one of the highlights IMHO was the caller who acknowledged and lauded her UK IVF counselor who — in an effort to keep her best interests at heart — cautioned that vulnerability and false hope prove a weak defense against those intent on selling IVF. She warned that that even when the odds are long “there will always be someone who will take your money.”

(Much more on this topic in Finally Heard reviewed a few days ago by author and academic Melissa Miles McCarter:  “This book examines the traumatic effects of IVF and the ongoing questions about this industry in a thoughtful and powerful way. Worthwhile reading for anyone struggling with infertility and life beyond it.”)

** Update: What a week in IVF recovery stories! Bourn Hall (the world’s very first IVF clinic) asked me several months ago if I would be willing to share my story about moving away from IVF as a way to help other women. They chose this week to run my piece. Here it is: When is it Time to Move Away from IVF Treatment?  Closing out the week, my friend and best-selling author Tracey Cleantis was featured in The Daily Mail. You can read that piece here. **