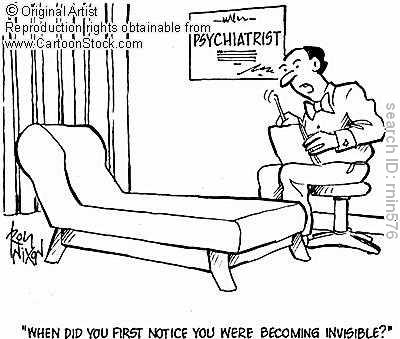 “The minute you retire, it’s as if you’re invisible.”

I had to do a double-take when I read that sentence in an article about how difficult it is to get Stanford profs to make space for younger faculty.

What my brain read was “the minute you’re infertile, it’s as if you’re invisible.”

Funny thing my brain, it loves a good Freudian slip. I felt a poignant kinship with the English Literature professor behind the quote. He was acknowledging what few of us in society truly want to admit — we want to know that others “see” us.  Fading into the woodwork has its advantages, clearly, if your desire is be overlooked, but that’s usually temporary. It’s when you’re involuntarily invisible that there are emotional consequences. How many of you confronting infertility have been in a social situation where you felt unseen?

Hands in the air…let’s count ’em.

The distress or frustration that can accompany a sense of being invisible is probably second only to feeling irrelevant — another monster ego deflator.  Infertile folks, though, don’t have an exclusive patent on either. It just feels that way sometimes. I’m guessing Professor Felstiner would be happy to know his relevance continues –even without his office and stationary. In viewing the world through his eyes I was reminded not only how important it is to be seen but also to “see” others.

The ideas led me to a little more research and a study that was the basis for a piece called “That Spinster Stigma: Others Are Intrusive or They Ignore You.”  The parallels were startling:

“The single women in the study felt that their actual life experiences were invisible when other people simply assumed they were married and had children. They also pointed to experiences with professionals, such as financial advisors, whose standard questions (for example, about how they would pay for their children’s college costs) were irrelevant to their lives.”

See also  The Unintended Consequences of Placing 'Moms' on Pedestals

From my experience knowing what it feels to be invisible I’ve found myself more aware of how others might feel that way, too.  I’ll leave you with a few thoughts from another piece, “Social Discrimination, Ego and the Slippery Slope:”

“When you are interacting with people today, make an effort to pay attention to your perceptions of them. What are you seeing? Who are you seeing…Breed compassion.”

And for Pete’s sake, don’t ask any intrusive questions!

12 thoughts on “Invisibility — Seen it Lately?”