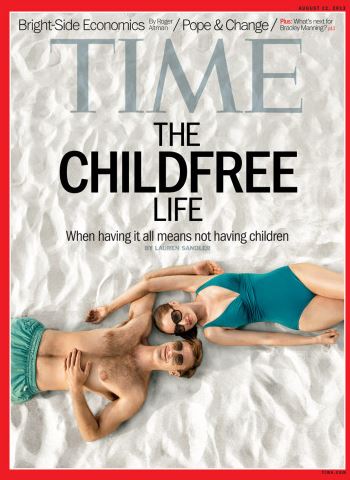 In the past year Time magazine has run two cover stories (Are You Mom Enough? and The ChildFree Life: When Having it All Means Not Having Children) and managed to miss — both times — a notable segment of the female population: women who don’t identify either as “moms” or “childfree.”

If you dropped in from outer space you would conclude, based on Time‘s view of the world anyway, that:

1)  People without children spend most of their time idly lounging around in the sand of by a pool (um, how does not having children make one independently wealthy?) usually with a glass of alcohol in hand — or at the ready in some carefree place. (BTW: I happen to know quite a few parents who drink more than a little … )

2)  My cohort: the vast majority of my blog and book readership — are those not parenting, but not because we didn’t want to or try to. In the media and television world we simply do not exist.

Nothing like being made to feel invisible, eh? Kinda makes you want to wave your hands, whistle and declare in your outdoor voice: “heeelllllo….we’re over here!”

The graphics included in the Time story provide extensive data points on the market size that moms represent in the U.S. ($2.4 Trillion), the average number of children born per woman (from 7 in Niger to 1.4 in Germany, Italy and Japan) and the percentage of childless women ages 40-44 who are “voluntarily childless” (49%).

Editor’s Note: In 2012, of the 1.5 million fertility treatments performed globally, 1.1 million failed: a 77 percent failure rate. In the United States, the overall failure rate was 68 percent. You can read more on author Miriam Zoll’s guest column at Our Bodies, Ourselves here.

While kudos are in order to the reporter, Lauren Sandler, for calling out “motherhood’s ambient roar,” something described as oppressive by women in their 30s and 40s who haven’t given birth. Ms. Sandler missed an opportunity to include the point of view of women for whom no black or white choice existed.

You’d think she was talking about shoe shopping, not human beings — as in DSW offers a wide selection of footwear ready to be snapped up, don’t miss today’s sale!

No mention whatsoever about the very real costs associated with building a family — all born by millions around the world without any guarantee a child will arrive or remain:

In short, just because you want to become a parent doesn’t mean it’s a sure thing for all who embark on that path. I’ve learned something the past 10+ years that Ms. Sandler and others have missed. There is a vital and dynamic group of women (and let’s not forget our menfolk) outside the neat categories that mainstream media love to pit against each other: parents and childfree.

Who comprises this overlooked part of the population? Those who were unable to conceive even after pursuing all manner of medical intervention, those not in committed relationships during peak childbearing years (and didn’t want to parent alone), those who timed out in the adoption world or were part of failed adoptions, as well as those whose partners were unable or unwilling to become parents.

Living between the two worlds — the moms and die-hard childfree — can often times be downright weird, as evidenced in this war of words. Neither knows what to make of us. Though those with children are particularly harsh with their judgement.

As a minority in our dominant pro-natal world, one that as Ms. Sandler points out “equates womanhood with motherhood,” and surrounded by the “glamorous martyrdom of childrearing” with the endless parade of baby pics and mommy talk that permeates our society, I can fully appreciate the complaints of one of the childfree quoted in the Time article:

I resent that the entire culture of this country is obsessed with kids.

That’s the first time I’ve seen that lovely statistic. So, those of us without children are seen by a third of Americans as having diminished social standing? Now that’s just cold. How about some love for those of us who pay taxes to support local schools and causes that support the next generation even if it means we are routinely overlooked in society’s rush to remind us daily about the mommy industry and the all important role of moms everywhere we turn.

In an era where motherhood has become what one university demographer described as today’s “social imperative,” it’s important to hear all the voices, not just the loudest ones.

On my reading list this summer: Cracked Open, by Miriam Zoll. What’s on yours?

34 thoughts on “How About a Time Cover Story on Women Who Aren’t Moms or Childfree?”