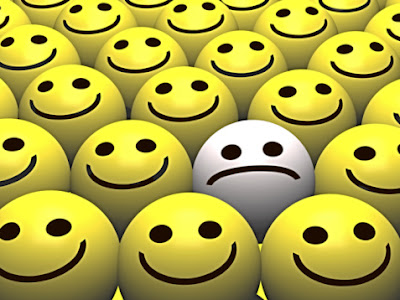 We usually want to believe we’ll be grace under pressure, stoic and even sunny in the face of adversity.

The truth is we never really know how we’ll respond to unexpected, searing pain and loss — being truly in despair — until we find ourselves facing it head on.  Even then we don’t have any confidence that we’ll muster the strength to get beyond it — to push forward. Some do and some don’t.

I am reminded how much suffering has the power to change us when I review my own journal writing from five or 10 years ago, or when I see or hear of people engaged in epic struggles.  The cultural norm — particularly here in the U.S. — is to criticize those absorbed in heartache as being without grace, or to harrumph impatiently when grief lives on longer than others are prepared to accept.

We’re reminded daily that it’s bad form to remain too long in a negative state. Society is uncomfortable — plain and simple — when the iconic happy face is not front and center.

A recent piece, however, called What Suffering Does, by The New York Times columnist David Brooks, takes a more nuanced look. Noting that “we live in a culture awash in talk about happiness,” Brooks challenges readers to take a closer look at how the two different states impact us:

“Happiness wants you to think about maximizing your benefits. Difficulty and suffering sends you on a different course.

“First, suffering drags you deeper into yourself. The theologian Paul Tillich wrote that people who endure suffering are taken beneath the routines of life and find they are not who they believed themselves to be. The agony involved in, say, composing a great piece of music or the grief of having lost a loved one smashes through what they thought was the bottom floor of their personality, revealing an area below, and then it smashes through that floor revealing another area.”

Theologian Tillich is spot on. There’s nothing quite so dark as seeing yourself at your worst and then discovering your heart is blacker than you might have imagined. Worse still, as I recall, everyone wants to hurry the downhearted to seek and find tidy closure (as if such a thing exists).

But that’s precisely the wrong tonic. Brooks goes on to note,

“…suffering gives people a more accurate sense of their own limitations, what they can control and cannot control. When people are thrust down into these deeper zones, they are forced to confront the fact they can’t determine what goes on there. Try as they might, they just can’t tell themselves to stop feeling pain, or to stop missing the one who has died or gone. And even when tranquility begins to come back, or in those moments when grief eases, it is not clear where the relief comes from.”

I didn’t always like the person I was over the past few years but I know from experience that there is no fast track, no magic formula for accessing tranquility.  In relating to a researcher/journalist over lunch recently what Mr. T. and I experienced in the protracted failure after failure to conceive for a decade, I marveled that we not only remained sane, we managed to remain together. We are stronger for all that we lived with and through and I am deeply grateful those years are now in the rear view mirror. As if reading my mind, Brooks wrote:

“Recovering from suffering is not like recovering from a disease. Many people don’t come out healed; they come out different. They crash through the logic of individual utility and behave paradoxically. It’s at this point that people in the midst of difficulty begin to feel a call. They are not masters of the situation, but neither are they helpless. They can’t determine the course of their pain, but they can participate in responding to it. They often feel an overwhelming moral responsibility to respond well to it….

“People who seek this proper rejoinder to ordeal sense that they are at a deeper level than the level of happiness and individual utility.”

As angst-ridden as I might felt in my worst despair, the suffering in the end forged a better, more forgiving person. I also found that as Brooks concluded, “even while experiencing the worst and most lacerating consequences,” I managed to “double down on vulnerability” and hurl myself deeper and gratefully into my loved ones and commitments.”

See also  Who Shapes History? We Do

I certainly didn’t choose to suffer but I’m thankful for what the suffering taught me.