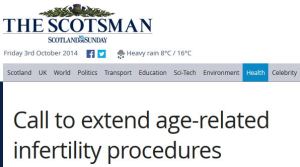 Come again? Did I read that wrong? Hasn’t aging always been synonymous with losing fertility?
Menopause, anyone?

Seems odd to call out normal aging as though it’s a disease or a condition that needs to be treated with procedures. In fact, the bigger question is why are women waiting until the age of menopause to try to have children? The belief (hubris even) that humans can outsmart mother nature is fostering a volatile environment with lots of money being exchanged — all for magical thinking. 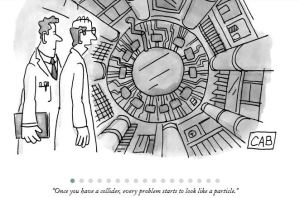 To make a play on the adage “when you have a hammer everything looks like nail,” you could say the latest law of the instrument is that when you have a fertility clinic every biological function becomes the basis for a fertility treatment. Why don’t we just start harvesting ovarian tissue and egg cells when girl babies are born — you could get the youngest eggs on the shelf, no need to wait for those 20- or 30-something eggs.

It’s been a dizzying week of headlines and reporting in the reproductive world — and we’re still days away from the annual meeting of the American Society for Reproductive Medicine (ASRM) which is taking place in hallowed halls of …. Hawaii???

Talk about bad optics … not to mention the awkwardness of conversations in the exam rooms of the reproductive endocrinology units all across America.

Patient: Doctor, it appears I’ll be ovulating in mid-October.  Can we plan for the fertility treatment later this month?

Doctor: Um, ah, well, I know you’re not getting any younger, but we’ll need to push that procedure back on the schedule. I’ll be in Hawaii knocking back Mai Tais while I attend the session about re-engineering my practice for the (lucrative) fertility preservation market.

I kid you not. This ASRM conference has a session or two dedicated to going after what’s now seen as the latest growth market: women without any specific infertility condition — other than living and growing older with each day on the planet. It’s titled:

Fertility Preservation Patients: How to Re-engineer your Practice to Accommodate Them
Marybeth Gerrity, M.B.A.
University of Connecticut Health Center

The conference brochure meeting cover (as you’ll see here) shows a silhouette of a woman surfing. Does that strike anyone else as off? A tad too whimsical for the vast majority of those shelling out thousands of dollars for invasive treatments that may end in miscarriage or loss of some kind?

I can tell you that when I was fighting nausea coming out of my laparoscropy to address aggressive endometriosis I was not thinking, “yeah, I sure hope my endometrial surgery doesn’t conflict with my doctor surfing the waves of change in reproductive medicine.” Nor did I want my reproductive endocrinologist or embryologist lost in thought in my surgical follow up wondering how they were going to spend their time on the beach. Missing from the conference? Any sessions on how to manage the emotional trauma of failed treatments now well documented as part of the process for many who undergo IVF cycles.

There is a “medicalization” and with it a dehumanizing aspect of the industry that has been growing more troubling in recent years. No longer are people at the center of the equation. It’s now profits. Have we reached a point where hawking reproduction “services” is now taking a page out of time-share pitches or worse, stooped to botox cocktail parties or auto dealer tactics of “come kick the tire” and get some popcorn and snacks?

Apparently we have. Though to find the answer to the question:  Should You Freeze Your Eggs? journalist Robin Marantz Henig points out in this week’s Slate, “an egg freezing party is not a great place to find answers to this or other questions.”

What might have been a comprehensive, serious discussion about the realities of biological function, instead became an egg freezing event, hyping a technique held up by one enthusiastic reproductive endocrinologist on hand as being “part of technology that exists to help us all, just like the iPad, just like Skype.”

A witness to the breezy, confident recitals and testimonials, Ms. Henig, wrote:

“Despite the positive vibe, egg freezing doesn’t necessarily stop the biological clock, not when the average age of egg freezing in the United States is 37.4. By that time, the eggs being frozen have already suffered a lot of the chromosomal breakage and genetic replication errors that make later childbearing iffy to begin with. Yet if the women at the cocktail party had their suspicions, they weren’t being addressed at the information session that followed. After all, EggBanxx had billed the event as an evening of “The Three F’s: Fun, Fertility, and Freezing”—no F’s left over for “Failure Rates.”

According to the UK’s Human Fertilisation and Embryology Authority (HFEA) only 20 babies have yet been born from frozen eggs to date in the United Kingdom — hardly enough to make it a safe investment in what’s billed via marketing materials as an insurance policy for a future family.

On the other end of the spectrum and across the pond, Professor Robert Winston, one of the doctors who pioneered IVF has a decidedly different take.  You can bet he was not on the list of ASRM potential keynotes in Hawaii after being on the record with warnings like “too much focus is placed on referring people for IVF rather than investigating the causes of infertility.”

Beyond thinking that clinics rush couples into IVF and charge too much, he is “kicking it old school” and launched a free advice service with Genesis Research Trust, a charity that funds research into women’s and babies’ health. He’s answering questions about fertility via the charity’s website in his spare time, “as he’s concerned people aren’t being given enough information.”

Sharing medical information. What a novel idea. Rather than the ASRM offering sessions on how to grow fertility clinic practices they might be better served policing startups offering intros to fertility clinics and financing deals on a procedure that is still in its infancy. This latest startup created by women for women would be better served taking a page from Dr. Winston’s book. Or at a minimum they could share the fine print. As Ms. Henig noted, even the juggernaut ASRM when lifting its experimental label on egg freezing in 2013 “most emphatically did not recommend using the procedure in the way it’s currently being promoted”:

Egg freezing ‘for the sole purpose of circumventing reproductive aging in healthy women’ could not yet be endorsed, the ASRM committee wrote, because there was still not enough known about the procedure’s ‘safety, efficacy, cost-effectiveness, and emotional risks’ to offer it as a way to stop the biological clock.

Seems the only thing being birthed these days is an enormous experiment. The next chapter in this story, I fear, will involve tremendous disappointment and likely litigation. Perhaps I should have titled this post: Fertility Procedures Spawns a Growth Market for Attorneys.