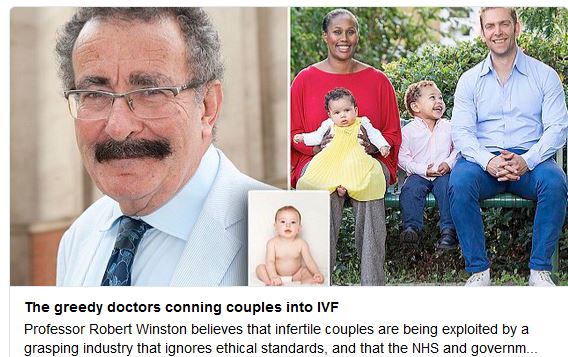 Doctor, con and IVF are not words you want to see in the same sentence.

Yet that’s what you’ll find in this strongly worded piece written by Professor Robert Winston, author of a new guide on fertility.  Winston’s scathing analysis of his brethren and the fertility industry that has grown up around treatments is all the more noteworthy since he was a pioneer of in vitro fertilization (IVF).

Profiteering and exploitation are not what we usually associate with those who take the Hippocratic oath. Rather we’ve been socialized to view doctors in white coats as trustworthy, ethical purveyors of unbiased health advice so it’s all the more jarring to learn that some are anything but. Winston writes:

As a doctor who has been so closely involved with fertility treatment, I deeply regret that in vitro fertilisation (IVF) has become so commercial. I had thought practitioners would be sensitive enough to realise that they were dealing with people at their most fragile…I am proud that Britain led the way in pioneering IVF. But it has become immensely profitable – and the truth about its success rates is frequently hidden.

The latest entrants in the commercially-driven fertility industry are those hawking egg freezing services. In the land down under this week, Sunday Night, a news magazine show, devoted a segment to the topic and bioethics it raises. In To Freeze or Not to Freeze viewers get a look at the complexities involved in fertility treatment decision-making as well as what’s required to procure eggs. They also hear from those who question the marketing tactics and advise on what to beware of when assessing this new, expensive and largely unproven procedure.

See also  The Forum: What Would Make You Attend a Public Infertility Discussion?

The segment imparts a clear message: do not be lulled into thinking that egg freezing offers any guarantee of a baby. Beyond the mechanics, health advocate and author Miriam Zoll makes clear that the procedure is not without controversy and risks. She points out that the fertility industry continues to operate without any external oversight, stating plainly to journalist Peta-Jane Madam, “particularly in the United States there’s basic anarchy.”

Without a good framework or consumer protections, those seeking to reconcile infertility or to understand their fertility health are left to their own devices. Blogs and message boards have been the go-to haphazard way to get some idea of what to expect and the people posting are almost invariably doing it under an alias.