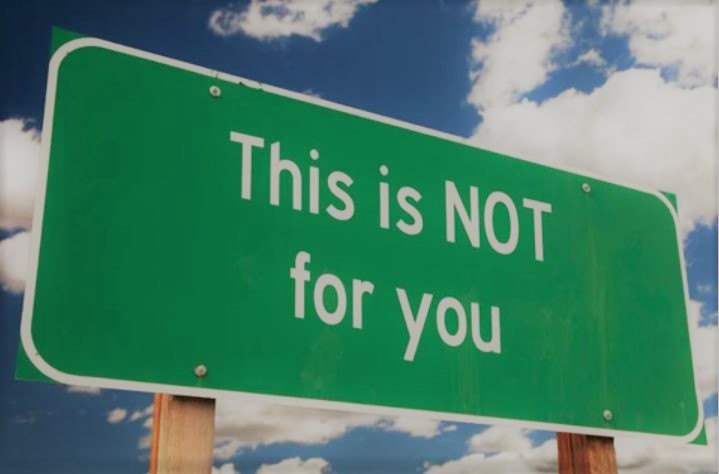 Egocentrism sure is easy to spot these days.

This observation came to me this weekend. It started with a New York Times essay on co-housing initially titled: Is This the Cure for the Loneliness of American Motherhood?

As an aside, my fellow blogger and dear friend Sarah discovered the print edition of the paper retooled the headline to read: Does Co-Housing Provide a Path to Happiness for Modern Parents?  This change, apparently, is a nod to the fact that not all who raise children are female. However, this weak attempt at inclusion? Woefully insufficient.

Now, I was ready to skip over this essay entirely. Why? I expected it be yet another exclusionary self-serving ode to misunderstood motherhood and the pampering of progeny. No where is egocentrism — the inability to accurately assume or understand any perspective other than one’s own — more prevalent than in the parenting community.

So, let me share part of my submitted comment and then we can dig into this parental egocentrism further. Here goes:

“This piece was a lost opportunity to explore how to be more creative and embracing of all who experience isolation or loneliness in modern society. The author ignored or overlooked a large swath of population (e.g. the 20 percent of adult women who are NOT “moms” due to choice or a variety of circumstances — myself included). Like Rodney Dangerfield, we get no respect, or acknowledgment for that matter. We non-moms are accustomed to being shut out of cultural stories and ignored or marginalized by “moms” who brandish their mommy-hood like a medal or badge of honor. There are few things more isolating and weird than being the only non-parent adult in a group, community or social event. Maybe the first step in connecting with others is to recognize that everyone has needs and a desire to be seen and heard. It’s a lot easier to lend a helping hand when you know it will be reciprocated in some way. We non-moms figured that out a long time ago, thanks in part to the behavior of today’s moms. Friendship and community building work best when it’s not one-sided. Just saying…”

Harsh? Let me unpack this egocentrism a bit further.  An illustration of a large baby sitting on a cushion-y blanket, a throne of sorts, tended to by little adults satisfying baby’s every need accompanies this essay. 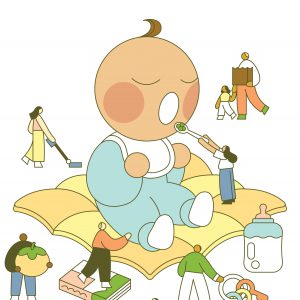 The image alone is disquieting. However, this egocentrism is where we are in today’s America. Because, the author of this piece, sadly, is not alone. She joins many who are intent on satisfying her needs and elevating her child above all others.
Vox tells an unsettling story about America’s upper-middle class. They are “hyper-focused on getting their kids into great schools and themselves into great jobs, at which they’re willing to work super-long hours. They want to live in great neighborhoods, even if that means keeping others out…”
And here lies the irony of The New York Times essayist. She longs for co-housing not to work selflessly on behalf of others. No, co-housing instead puts others to work. One wonders if she wants to offload her responsibilities entirely. Perhaps she’s in search of more stimulating activities to feed her egocentrism?
Co-housing would allow her to conscript others in the task of pampering her children. Seems the only charitable part of the essay is her belief that she can help alleviate societal loneliness. How? By putting “lonely” people to work! Bonus, she can enrich her children’s lives in the process.

Let Me Put You to Work, Huh?

I was not alone in my doubts. Her proposal didn’t sit well with others for a variety of reasons.

“If you are thinking of moving into a cohousing arrangement do your research. If you’re moving their to get free labor, forget it. People will tire of you very quickly.”

Now some props for some parental honesty:

“I can’t imagine having the energy for other people’s kids or older folks’ needs at the end of the day. Babysitting or doing childcare is the last thing I want to do after working or spending time with my own children. No thanks.”

Set a Better Example for Children

First, can we agree the best way to make healthy functioning new adults isn’t to put a baby on a throne? In fact, one could argue that reinforcing a child’s self-absorption and egocentrism is the opposite of what creates empathetic, productive and caring members of society.
There are many things troubling about the one-way street the author drives down.  The tunnel vision was best captured by Sarah. Fortunately, she got the last word before The New York Times closed the comments:

“How ironic that the author chose to delve into this important topic of community in our culture from the single minded perspective of parenthood…the exclusion of the childless not by choice demographic was particularly curious. Societal invisibility, a complete lack of space in the human conversation and insufficient (or often non-existent) support from our family systems has us writing the book on isolation.”

And there you have it, parents: your singular focus on you and your progeny contribute to the alienation and the loneliness of others.

See also  When Does the Pursuit of Pregnancy Go Too Far?

4 thoughts on “Egocentrism Begins At Home, Not a Good Trend”