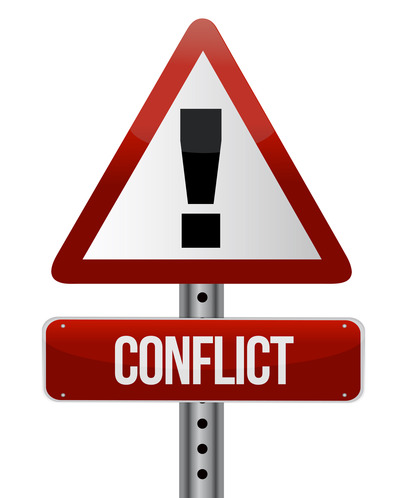 Most of us take non-profits and their causes at face value and assume the people leading the charge are straight arrows with nary a conflict of interest. This is not always the case.  The most recent example of things not quite being what they seem came from the recent CBS News investigation into the Wounded Warrior Project.

Non-profits formed around diseases are also ending up in the hot seat. A few years back Susan G. Komen (formerly known as Susan G. Komen for the Cure and originally as The Susan G. Komen Breast Cancer Foundation) got called out for its strange bedfellows. An op ed in The Washington Post made clear the organization was deep into conflict of interest problems partnering with companies with links to carcinogen production — from an oilfield services company that uses “a process for extracting oil and gas using a mixture of water and chemicals, including known or possible carcinogens” to KFC after being sued for suspected carcinogens in its food.

From Praiseworthy Grassroots to BigPharma Bedfellows

Now there’s reason to wonder about troubling a conflict of interest with RESOLVE, a non-profit organization that bills itself as The National Infertility Association here in the United States.

For weeks RESOLVE has called on its volunteer community — particularly bloggers and social media participants – entreating them this week to lead a charge to #StartAsking for more awareness and access to treatment as part of its designated National Infertility Awareness Week (NIAW) campaign. What troubled me though was the cast of characters that RESOLVE was “partnering” with in this endeavor.

Originally a grassroots, patient-led group RESOLVE was formed 40 years ago to offer peer-to-peer support. Many of the 400 volunteers RESOLVE listed on its 2014 tax filing continue to work at the local level. These volunteers remain committed to helping individuals cope with the body blow that an infertility diagnosis delivers. Their grassroots work is praiseworthy. Go volunteers!

Something, however, kept making me uncomfortable about RESOLVE’s partners and why they are so gung-ho about National Infertility Awareness Week. Ferring Pharmaceuticals even issued its own companion press release.

Here’s the thing. I know firsthand from my work in the business world, “partners” have clear motives and incentives for growing their bottom lines. What I learned digging into RESOLVE’s “partners” made me a bit nauseous — flashbacks to my fertility drug injection days.

Let’s take EMD Serono, a RESOLVE Impact Partner. They provided between $150,000 and $250,000 to make that category of partner.  They are also the maker of Gonal-f, an expensive drug — check out this a link to women discussing the cost of it on The Bump. The Gonal-f shot provides the hormone (FSH) that helps cause ovaries to produce eggs.

So this begs the question: If EMD Serono is forking over nearly a quarter million dollars, does RESOLVE prioritize serving infertility patients or does it serve deep-pocketed “partners?”

Should Non-Profits Spend on Vanity Projects?

I had to know more about how RESOLVE was deploying its financial assets. Among the things I discovered: RESOLVE recently engaged an outside firm to burnish its brand and, according to this client testimonial posted on the MCI website, achieve a goal to “control the conversation around infertility awareness.” 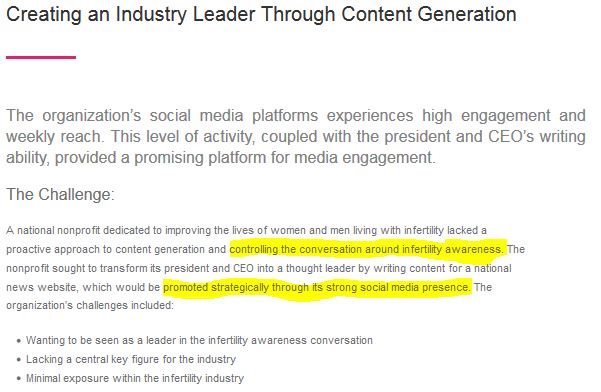 Now I don’t know about you, but I don’t think it’s a good

thing when any organization, institution or entity controls the conversation. Aren’t we supposed to live in a free-wheeling democracy where different points of view are not only welcomed but encouraged??

By the way, MCI makes no bones about its business objective “to strategically engage and activate their target audiences, building the dedicated online and offline communities they need to strengthen their brands and boost their performance.” (Incidentally RESOLVE’s President is also a member of the MCI leadership team)

So let’s get back to consumers and their needs. Don’t they want responsible, medically-indicated procedures to combat infertility?

How does that jibe with RESOLVE’s corporate sponsors — a roster of reprotech service providers and companies largely in a position to profit from RESOLVE’s loud call to expand access to fertility medicine. Minus the documentary film producers behind the film, Have a Baby, the NIAW team (shown above) is a who’s who of reproductive medicine clinics and pharmaceutical vendors who reap huge proceeds from selling drugs, products and services.

Of course they want to drive more access and health coverage for fertility services.

I’m pretty sure the board members of Merck (market cap $153.B), Ferring Pharmaceuticals and IntegraMed Fertility (purchased in 2012 for $169.5M) aren’t feeling the pain of a woman reeling from a diagnosis of PCOS or endometriosis or premature ovarian failure. What they’re saying is: ChaCHING! Let’s partner with RESOLVE to harness all these women– and those worried about one day — struggling with getting pregnant and put them to work demanding health insurance coverage. What can be more ‘feel good’ than getting behind motherhood?

Infertility is only a disease when there is a medically indicated diagnosis (e.g. azoospermia, PCOS, POF, endometriosis, etc.).

I hate to be a buzzkill, but aging has consequences. Unlike what the entrepreneurial members of the American Society of Reproductive Medicine (ASRM) would like us to think, an old uterus is not diseased–it’s old. If aging were a disease imagine how many people would be demanding their health insurance cover cosmetic surgery for their ‘diseased’ sagging skin or reimbursement to color their grey hair?

It’s important to remember that in vitro fertilization (IVF) was developed specifically to treat women with a clear diagnosis of blocked or damaged fallopian tubes. The over use of IVF has been studied and criticized by physicians and bioethicists alike.  IVF failure rates are high and prevalent among predominantly healthy, older women who have played Russian Roulette with Mother Nature. Then there’s the issue about the lack of comprehensive, longitudinal studies tracking those exposed to high doses of hormones and any health risks that may arise over time.

In light of the misplaced trust we sometimes place in biotech companies (Theranos, anyone?), healthcare providers and advocacy groups, perhaps we need to #StartAsking some questions. Let’s ask our government institutions and industry watchdogs to pay greater attention to how health advances are developed, delivered and marketed.

Perhaps it’s time we #StartAsking for a closer scrutiny of RESOLVE’s mission creep and those of their deep-pocketed and eager sponsors. 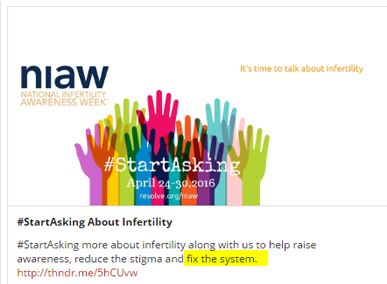 Fix the System for Whom Exactly?

We need to #StartAsking for the medical establishment’s ‘do no harm’ pledge not to take a backseat to profit-taking and market share expansion.

Let’s also #StartAsking for the responsible, ethical and evidence-based practice of infertility medicine. That’s not always what transpires with an entrepreneurial health industry. Health entrepreneurs here in the United States are free to pursue protocols that have not been peer-reviewed or medically indicated.

In more recent years, infertility clinics have turned their attention to otherwise healthy women. Using all forms of media, new ‘fertility’ providers are boldly advertising egg freezing services (financing plans available). The young woman seated next to me in the dentist office last week did a double take when one such “freeze your eggs, girlfriend” radio ad punctuated a Maroon 5 song. What I reminded her was that egg freezing, while available, doesn’t actually guarantee a pregnancy or live birth.

Loose regulation at both the federal and state level makes the U.S. an outlier compared to the rest of the developed world.  Other Western nations — including Canada, the UK, Sweden, Germany, and Australia — heavily regulate many aspects of ‘fertility’ services.

Perhaps it’s time we #StartAsking for another look at that?

For more on why it’s time to reform and regulate the ‘fertility’ industry, listen this interview.

Now, dear readers, I have an ask of you — please share this post with everyone you know who cares about free speech and responsible medicine.