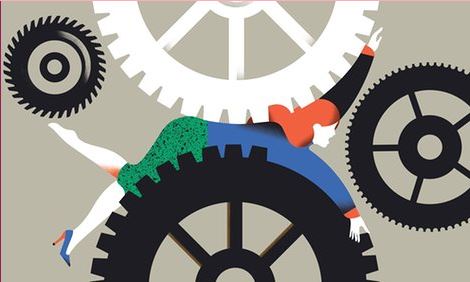 Moira Weigel’s essay in The Guardian, The foul reign of the biological clock, casts new light on a little explored but powerful cultural phenomenon. It also revealed the fertility industry’s long history of capitalizing on fertility fears, with women paying the price.

Let’s start with the facts. The term ‘biological clock,’ Weigel explains, was originally coined by scientists to describe circadian rhythms, the processes that tell our bodies when we should rise, eat, and sleep.

In the late 1970s, however, the term quickly became a fixture in popular lexicon — a shorthand for the finite nature of female fertility. Embedded in the popular press coverage of the biological clock, Weigel notes, is “the idea that being female is a weakness.”

Her thesis that “the story of the biological clock is a story about science and sexism” is spot on. It was suddenly the woman’s responsibility “to plan their love lives with an eye to having children before it was ‘too late’.”

I was in my teens when this cultural phenomenon took hold. I remember it well. Almost overnight the biological clock was at the center of all manner of modern challenges — whether in relationships, career or simply living. 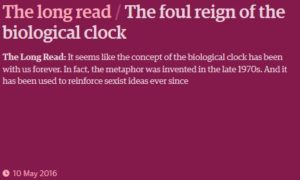 Beyond Weigel’s well researched exploration of the biological clock’s cultural role in counteracting the effects of women’s liberation, I’d like to zero in on how the biological clock became the catalyst for today’s rapidly-expanding fertility industry (projected to be $27B for IVF alone by 2022).

This line in her essay brings the point home:

…If a marketing team had been trying to come up with an advertising campaign to sell a broader population of women on IVF, they could hardly have done better than the flood of stories about the biological clock that the Washington Post article by Richard Cohen started.

Yes, the biological clock and the arrival of Louise Joy Brown via in vitro fertilization (IVF) can both be traced back to 1978.

In the years since, the reprotech industry — including RESOLVE and the American Society for Reproductive Medicine (ASRM) — have surreptitiously turned the modern day interpretation of the biological clock, the natural aging of a woman’s eggs, into a ‘disease.’ This disease characterization, incidentally, allows them to lobby for health insurance coverage of expensive treatments.

More treatments = more profits. Clinics are compensated $15,000-$18,000 per cycle — depending on how many add-on services are involved. No matter that there’s a near 80% failure rate per cycle. The clinic earns regardless of outcome.  You won’t find the number of failed cycles in the marketing materials.

Men Have Their Own Fertility Shelf Life

Among the takeaways from Weigel’s essay: It’s clearly time for a narrative rewrite. What’s been wildly under-reported is that men have their own biological clock. As Weigel reports, “from the 1980s there has been a large and growing body of research showing that sperm counts and quality diminish over the years.”

The children of older fathers have much higher risk of autism and other complications than those of younger ones do. Often ‘old sperm’ simply flail and perish around an egg they are trying to fertilise.

A search on fertility issues inevitably focuses on women despite this fact shared in Weigel’s piece:

Women and men are found to experience fertility problems at roughly equal rates, but you would never know it from reading most press coverage of the subject. Our assumption seems to be that reproduction is a female responsibility first and foremost. Anything going wrong with it must be a woman’s fault.

Women Have Paid the Price in More Ways Than One

“Our culture so takes for granted that women will suffer in order to become pregnant, and these methods are so profitable that few researchers are invested in exploring alternatives. Even if a couple is having trouble conceiving because of ‘male factor’ problems, the female partner still has to undergo IVF.”

Sadly, she’s right. And with 20 years between us, Ms. Weigel and her generation will have to contend with yet another new way the fertility industry will cash in by sowing the seeds of biological clock fear and blame: social egg freezing.  In 2014, as a generation of entrepreneurial clinics moved to capitalize on the business opportunity, the ASRM annual meeting in Hawaii hosted a few sessions on the latest biological clock growth market: women without any specific infertility condition — other than living and growing older with each day on the planet. It was titled: Fertility Preservation Patients: How to Re-engineer your Practice to Accommodate Them.

See also  Why Do We Look the Other Way On IVF Addiction?

Echoing one of my many blog posts, Weigel writes, “like any industry, the assisted reproductive technology industry seeks to expand and to capture new markets.”

To make a play on the adage “when you have a hammer everything looks like nail,” you could say the latest law of the instrument is that when you have a fertility clinic every biological function becomes the basis for a fertility treatment.

Moreover, Wiegel and I agree about one glaring omission: the lack of longitudinal studies and clinic data tracking the health risks of women who inject hormones and undergo egg retrieval. As I wrote in a cautionary piece about egg freezing for WIRED, no one knows how much of the chemicals used in the latest freezing process are absorbed by eggs, and whether they are toxic to cell development. Furthermore, even with the new flash freezing process, the most comprehensive data available reveals a 77 percent failure rate of frozen eggs resulting in a live birth in women aged 30, and a 91 percent failure rate in women aged 40.

The foul reign of the biological clock, it seems, is extending to yet another generation, per this fact Weigel shared:

Studies have shown that since the turn of the millennium, women are growing concerned about their fertility at younger and younger ages. In 2002, the Centers for Disease Control and Prevention’s National Survey of Family Growth reported that in the US the number of 22 to 29-year-olds who had received fertility treatment had doubled over the previous seven years.

@PamelaJeanne @gdnlongread the next best thing is to write toward 18 and 23 year olds I think!

For more on the questionable business tactics used by the fertility industry over the years, check out: Fertility Industry Evokes Glengarry Glen Ross

Now, dear readers, the floor is yours. Let’s discuss.

3 thoughts on “Biological Clock and the Capitalizing of Fertility Fears”